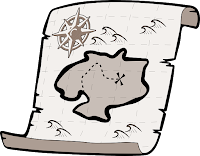 I know it's a bit cornball, but I put a lot of Easter Eggs regarding indie RPGs in my adventure game Deathtrap Lite. In places, they get to a stupid level per page. I thought I might list them out for anyone who wants to see how many they caught.

Consider each a love letter of sorts to someone I admire in indie gaming or pop culture.

p.1 "Bringer-of-storms" as the name for an elven king is an Appendix-N reference to Elric of Malnibonné and Michael Moorcock

p.3 "The Devouring Wilderness" is a reference to the saving throws in Stephen Smith's World of Wierth

p.4 "Tzwa" is meant to sound like 'Shwa after both the underground comics and a nickname for my home town.

p.4 The Tzwa sigil is inspired by the Bad Moon Insignia from Warhammer 40,000: a group of wealthy and tech savvy space Orks.

p. 5 The Knave class is named after the OSR role-playing game Knave by Ben Milton

p.8 The Warrior class skill "Mighty Deeds" is a tip of the hat both to Dungeon Crawl Classics RPG and the Spellburn podcast.

p.10 the Analyze Dweomer skill is named after a classic TSR-era D&D spell.

p.29 the discussion of armour here will be instantly recognizable for fans of the Shadiversity YouTube channel as inspired by his analysis of Renaissance armor

p.30 I went out of my way to use the word Zweihander  here as a nod to the Warhammer retroclone by Daniel Sell.

p.33 Small but Vicious Dog refers to the dog that ratcatchers in Warhammer Fantasy Roleplay start with.

p.39 All of the example PC names except Kai are PC from the World of Weirth campaign. The name Adora is also a second-hand She-Ra reference.

p.45 Grues are another Appendix-N reference, to Jack Vance's Dying Earth series, and became a long-running trope in TTRPGs I aim to resuscitate.

p.46 Spellburn is named after a similar mechanic in DCC RPG .

p.53 "Breath of the Night" is a mashup of titles of Magic: the Gathering cards that ended up being an inadvertent reference to the Demon Slayer manga.

p.59 the limbs to tentacles mutation is a signature of Venger Satanis' Cha'alt and Purple' games

p.62 Marble Madness is a spell that I first encountered in Ben Milton's Knave, that I love for its reference in turn to classic Nintendo.

p.67 Raggi's Transition is named after Lamentations of the Flame Princess author James Edward Raggi III, and is inspired by a spell I first saw in LotFP

p. 68 not a reference so much as an acknowledgement, Knave was the source for most of the simple spells.

p. 73 I draw inspiration for the structure of my carousing table from Luka Rejec's Ultraviolet Grasslands and Black City, as well as the specific entry about the mule.

p. 83 The drug Kavah is a deliberate reference to a tea-like beverage from Anne McCaffrey's Pern novels; Liriel is an accidental one to the Dragon Age video games.

p.89 "Biblically Accurate Angels" are a meme that makes rounds through the OSR regularly.

p.92 There's that small but vicious dog from Warhammer again.

p.98 The Phrase "What ho Frog Demons?" And the flavor text "What ho, Mortal?" Point to Chris Kutalik's module What Ho, Frog Demons.

p.102 More grues! The grue here is designed to feel like the ones in the Zork games to a tee.

p.105 The Orange Sludge here is a reference to Hot Springs Island by Jacob Hurst.

p.106 "No Mortal can outrun a redcap" is the tag-line of my favorite D&D podcast.

p.108 The troll's flavor text us a reference to J.R.R. Tolkien's The Hobbit.

p.115 The example of catastrophic damage is a joke about the Die Hard movies.

p.118 The magical Runehammer trap is named after the RUNEHAMMER YouTube channel and imprint of Hankerin Ferinale.

p.119 The Scrap Princess trap us named after the awesome OSR blogger & artist.

p.122 The key bloom is adapted from a trap from one of the early SAW films.

p.123 The Bell of Lost Souls trap is named after the RPG news site.

p.127 the book Pacts and Blades is named after Lucas Rolim's game, while The Seven Blades of Numa is a reference to Tiago Rolim's game Numa.

p.128 A reference to B-2: Keep on the Borderlands is almost mandatory isn't it?

p.129 The Black Sand here is a reference to The Tomb of Black Sand by Jacob Hurst.

p.129 The black trapezohedron and deeping bell are straight out of two H.P. Lovecraft stories.

p.130 Maul of the Stonelords is an item borrowed from ICRPG

p.131 The Dust of Broken Heart is from the classic fantasy film Willow

p.131 Moonlight Box is both a reference to one of my favorite movies ("Box of Moonlight") and to the often very adult webcomic Oglaf

I wasn't setting out to create a Futurama episode in game form, but there is so much cool stuff in the OSR there was always an idea around to help me fill in the blanks in the game. 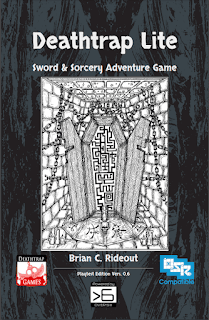 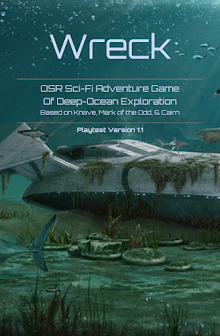