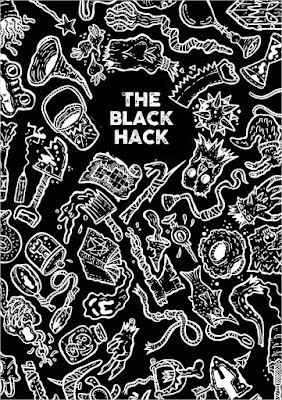 I learned the rules for The Black Hack in fifteen minutes as I was working on a review for The Wasted Hack, so that I could be sure I knew what was original Black Hack material, and what was Wasted Hack-specific. That includes the time it took me to get them, as they are readily available online.

Fifteen Minutes. And I read it twice. In the Second Edition the rules are less than 30 pages of the 126 pages of the corebook. And that is with some options and detailed refinements. This is an extremely easy and fast version of the B/X line of Dungeons and Dragons that has been modded to about as light as it can be while still being recognizable to its source material.

Here is the short list of the changes over D&D included in The Black Hack:

It is light, fast, and highly flexible, and player-facing. The DM need to roll anything except damage (although flat damage and players rolling for monster damage are options.)
The Black Hack has some ideas I love and some I loathe. Generally, though, if you want to play OD&D as fast and loose as you can, I would say it gives Index Card PRG Core 2e a run for its money on simplicity and speed.
I have not looked at the second edition of The Black Hack, but most of the alternative and expanded rules included in the Additional Things for The Black Hack document, which was later integrated into TBH2e are the same, or at least similar expansions to the rules that I noted in my review of The Wasted Hack.

Rolling not based on in-game turns, but on time played by the players adds an interesting twist. It prevents players from being able to sit around and kibbitz about problems, because after 15 minutes of it, something is going to kick in the door and force some action on them. It also means that dragging encounters are prone to suddenly get interesting as a third party is attracted by the noise. I can think of a number of situations where I might use this rule (like playing with little kids).

I like the option of letting players do all of the rolling. It keeps DMs from thinking of the monsters as "Theirs" and forces monster and encounter design to be kept a little simpler. Like the real-time random encounters, I can see times when I might use this. On the other hand, I like my dice. So, it is not something I would include in every game.

The Death and Injury Table

The Black Hack mitigates the lethality of OSR games a little by making characters roll a d6 on a table to determine what happens after a battle where they were reduced to 0hp, assuming there is anyone left to check on them. on a 1 they're unconscious; on a 6 they're dead, In between there is a range of temporary and permanent damage that alters the way the character works. I like it, because it means you are not going to lose your favorite character the first time a bad guy gets a lucky shot, but you are not going to find that they are in perfect shape, either. Over time a character who isn't careful is going to end up needing to retire for their own good.

Depletion dice add little to the game other than a reminder to players to keep track of their resources, and a little chaos to represent that "how many bullets did I just shoot?" moment. Honestly, for most things it is better to just keep a count of how much food, ammo, etc. you are packing and be done with it. If your goal is to rattle them bones, though, I suppose it has an appeal.
I would consider light sources the major exception, as not knowing when your light might go out adds a lot of tension to a dungeon crawl. The Black Hack has a great optional PANIC! table to determine what happens to a PC when trapped in utter darkness.

This is an article in the making. I do use luck mechanics and like them, where they give re-rolls or a mechanical advantage. But Luck mechanics that let players take control of the narrative to change one fact like TBH's luck mechanic does - without a narrative way that the PC can make it happen - is corrosive to the narrative.

Overall The Black Hack is a light, fast, and simple OSR game that takes D&D and streamlines it until it is something all its own. I learned it in 15 minutes, taught it to my wife in less time, and I can see how smoothly it runs as I have used all of the mechanics it adds except the armour system at one point or another. It would be best used if you want to play fast and loose in a game where tracking your resources is less important than creating the most wild and wooly narrative possible. It is designed to be frenetic in pace and to make the characters heroic, but far from superheroes.
Posted by Brian C. Rideout at 9:25 AM