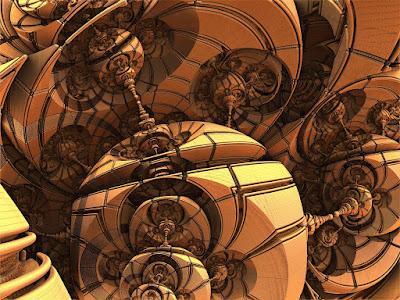 I originally posted this as an unlisted page, as it was just a doodle, but I decided to repost it and share with all my readers, as I would like to further develop the setting where it can be tagged.

Valthane Torion of the Cosmic Dreadnought Amber has a simple task; hunt down the last echoes of the Urzav Heresy; ancient magical machine intelligences that bend lesser material planes to the design of the Cast-off God. They shape whole worlds, life and all to a paradigm inimical to the Chaos Wizards.

Such polluted worlds are hard to get into, harder still to survive. No army can be brought to eliminate the heretical neo-Gods, the Fae, or the Paladins spawned by an Urzav Engine so long as the Engine itself functions well enough to keep directing probability.

And so it was with the reality he had been probing from the edge of the Vortex. The Engine there was weak. Fading. He could have stood by until it collapsed, but by the Demiurge, that was not his way. For every year he waited, new "Chosen Ones" and blessed knights, new ascended goddesses, new weaponized prophecies will arm the world against The Great Liberation, and the reign of the Wizards. More bloodshed, more mothers crying. More corpses cast into the Reactors...

He would have that Engine shut down and soon.

His Scyre had found a way. A burrowing link through realities that made little sense. This new world was accessible by way of an unstable region of World 937: Rustidium. A burnt-out atomic wasteland of mutants and dinosaurs.

From there, if a small team of spies could make it by way of the link, then they could enter into this heretics planet and destroy the Engine.

"Theryx," he addressed his docent. "Get a car, and some weapons. A cybernetic Lesser Chaote. I am going to equip a team."

As the twenty-eyed shadow bowed to obey, he placed his hands on the Scyre and put a call into the Vortex.

Agents willing or not, you have been torn through the dimensional Vortex and given a job. Infiltrate a Heretical World and find the Holy Computer that has shaped its gods and magic into living weapons against the Chaos Wizards.

Getting there is the hard part. You are going to be projected onto Rustidium, a rotting hellhole of a world stalked by Gamma Raptors, self-repairing Killdrones, Slow Mutants and worse. You will have an electric Chaos Monk with you.  Keep him alive until you can find something or someone in Rustidium that has a magical link to the Heretical world. The Monk will use it to open a doorway in past all of the Quantum Wards.

Then the real adventure starts...

Oh... and if the Monk dies, you might be stuck sucking radiation on Rustidium until the megaroaches get you.

Aside from gear that will let you blend in on an average Heresy, you will be armed with submachine guns and a car... Both of which you will probably have to ditch when you get in.

Characters from the Void

OSE standard level 1 characters, except proficient in light firearms and personal force fields. There are some cosmetic changes by class.

Cleric: Clerics devoted to Gods are a hateful Heresy. A Cleric generated in the Vortex or Rustidium will be a members of the Order of Liberation, a holy order dedicated to freeing sentient life from the tyranny of enforced worship of False Gods. They tend to be cynical, and gain their power directly from the Demiurge: the mad idiot consciousness at the heart of the Universe.

Fighter: Fighters are mercenaries from a thousand different worlds or members of the elite commandos of the navy of the Great Liberation.

Thief: Mercenaries, convicts working off sentences, covert operatives of the navy, interdimensionsl quasireligious assassins. Take your pick. I add a lot of bonuses to well thought-out uses of Thief skills.

Magic-users: Magic is a neutral force predating the heresies... Maybe even the gods. It seems to relate to the fever-dreams of the Demiurge and nonsense he whispers into the code of the universe. Most today are trained by cosm-roaming psychonauts who like picking up strays in backward worlds. Many join the Liberation because they know that their power comes from the same place as the gods. Others because the Chaos Wizards reward talent with knowledge.

Dwarves: A strange matter of parallel paradigms, Dwarves manifest in any world where sentience is found, although they vary a lot from world to world. Many are found in the hostile worlds corps and engineering corps of the Liberation.

Elves: Spawn of Heresy, the elves were created on many worlds by the Cast-off God as exemplars of his light and warriors against darkness. They are, however, like AL, the Fae creations deeply flawed to that purpose. Few Heretical creatures are faster to cast off religion, deny their gods, and join the Liberation. They are often elite commandos in missions on Heretical worlds.

Halflings: Found on many dimensions in worlds near death, they once mastered Dimensional travel and spread out in an ancient diaspora, but could not maintain an interdimensional civilization. Their central fell, collapsed, and left the Halfling to build new civilizations based on their racial memories. They make great Scouts and competent saboteurs.

Spray and Pray: anything in a 30' cone must save vs wands or take 2d6 damage, uses up all bullets in box magazine.

Creatures of the Vortex

These plodding cyborgs serve as magical support for the Navy of the Great Liberation.

Pathfinder: Electric Monks can detect things from other realities with 24 miles, but it takes triangulation with 1d4 turns of Meditation at 3 points a distance apart to pinpoint it unless they are within 300'.

Quantum Sorcery : Once the Electric Monk has found an item from another dimension, it can open up a portal to that thing's ofiginal dimension, given an hour of uninterrupted ritual.