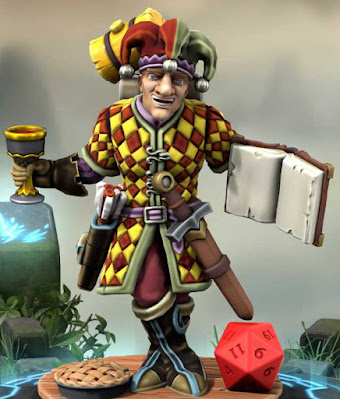 Mirdon Returns! Back in July I played a couple of solo adventures to take Lucas Rolim's Pacts and Blades: Moorcockian Fantasy for a spin. I put the journal of the second one up on the blog. Lucas liked it enough that it will be included in an upcoming Pacts & Blades supplement. It also let me show off the dungeon generating tools on Donjon.

I said when I released it that I would do another one as a follow-up. And right now I finally have the time to start a solo play. And, like last time, I plan on using it to discuss ideas that are relevant to people planning, designing, and running games.

Mirdon and his friend Doraleous were searching the Vault of Gloomy Chaos for clues to the location of the lost Dwarf fortress of Koganusân. They won a solid victory against bugbear and goblin in the frigid tomb, but then blundered into an ogre's lair. The Ogre pounced on Doraleous and beat him to a gory pulp in seconds. Mirdon fled for his life narrowly escaping his friend's fate.

Mirdon has sworn vengeance on the ogre and hopes to give Doraleous a proper burial. He has used the pittance of treasure he found on the bugbear to recruit a team of young, would-be adventurers to help him purge the Vault. A veteran of two adventures, Mirdon hopes to use his wits to get his revenge. However, first he wants to prove them...

🔳◻◻◻◻◻◻◻ Light
🔳◻◻◻                   Moderate
🔳◻◻                        Severe
Gear: Black book of Magdha, longsword, sling, pouch of bullets, hooded lantern, 3 flasks lamp oil, tinderbox, 50' rope, sack, chalk, 2 bottles ink, gambesson, mallet
Hideous and malformed, but sharp of mind, Mirdon served for decades as the court jester of the royal family. He served his king not just with brutal honesty and wit, but by deflating pompous courtiers and being invisible in courtly gatherings, where he could gather gossip. By night he lurked in secret passages and peeped in keyholes for his master, collecting intelligence with incredible finesse.
None knew the secret places of the castle as Mirdon did. In fact, he knew places in the castle that no one else did, like Queen Magdha's forgotten laboratory in a secret chamber beneath the garderobe. It was there, looking through her secret grimoire that he mastered the rudiments of witchcraft. A skill he kept secret until he was forced to protect himself from an enraged duke (Mirdon was caught exchanging intelligence for... ahem... the Duchess' "favours"). Once his demonic pact became known, Mirdon was forced to flee the court.
Mirdon befriended a Knight-errant, Doraleous, and discovered that his quest for magical lore, and Dor's lust for fame and glory dovetsiled nicely; they teamed up to seek a legendary lost Dwarven treasure. Sadly, Doraleous was murdered horribly before Mirdon's eyes on their second foray.

This play through is my chance to test out Lucas Rolim's zine-style expansion to Pacts & Blades, Salamandur Household.  I will review it afterwards.

As a matter of full disclosure, I play Low Fantasy Gaming on Thursday night's with Lucas in Stephen Smith's playtest team. My enthusiasm for Pacts & Blades has made us Internet friends. I believe my review philosophy will pad me from any excessive bias for- or against- his work.

The scenario, setting, and monsters,  have all been generated using Salamandur Household. And I am using the Alignment System included from it. For the rest, I am using OSRIC and BD&D... whichever has the easier subsystem. For the purposes of keeping things short, I will limit myself to just a handful of encounters.

Inferno is a city of flames, eternally smouldering stones make up rooftops and the city walls. Natural gas creates flames that flicker blue from nozzles all over the city. Fountains of burning bitumen well up into shaped bowls throughout the city. The volcanic fissure over which the city is built rattles with windmills made of thermal sails that drive the city's famous machinery (Setting: ⚂⚂).

It's people are red-scaled fire-folk, the half-salamanders who serve their elemental ancestors  by working at the heart of grand forges. The only thing finer than the steel they make are the firey wyverns they have bred as mounts. (People: ⚀⚀)

Their steel is traded for exotic spices and fine food-stuffs, as the half-salamanders are great gourmands; their elemental ancestors required strange cuisines to nourish them. These alchemical reagents pain every half-salamander that eats them, even though it is required for nourishment. They treat all other meals with care to ensure eating is a joy, not torment. They hope one day that they might find a combination of spices that will satisfy them and free them from their weekly meal of purified ash. (Looking for: ⚁⚀)

No outsider is permitted in the shrine of brass at its heart, however, for it hides a laboratory where the eldritch sages that created them still toil to perfect the human form. (Secret: ⚃⚁). Only the initiated are permitted to see the flesh-forges within.

With the exception of character art , I created Shanix, Lorenz, and Walken before I rolled up this scenario. Shanix' background and Lorenz' magic are really appropriate to the setting and scenario. As I made Walken a local to the setting, I will make him a heat-proof  half-salamander with strange dietary requirements for elementally purified minerals at least once a week.

Seriously,  I've been sitting on this project since the end of September.  Lucas is probably wondering how he can get me to get the lead out.

During a rain of firey stones from the Kingdom of Fire (Complications: ⚀⚀) the Mother of Fire Bees often stirs in the smouldering depths of the fissure (Creature: ⚃⚂) and may make a pact with those who consume her burning royal jelly... an otherwise much sought-after component of local cuisines (Problem ⚀⚂).

Of course, the locals cannot just get the jelly on their own. Other things stir below. They will trade wyverns and fine steel for it.

The climb will be perilous, and supplicating to the queen for both magic and honey risky.

Meta: Turning it into an Adventure

With so many details handled, just running a Donjon scenario seems insufficient. Instead, I will create an encounter list, then find a way

Now that I have a scenario and a setting, this one lends itself to all kinds of ideas and encounters just looking at what I have. Rather than a dungeon crawl, I am going to make much of this a linear descent. Here's what I have:

Dealing with the Storm

This is both a magical event and a great peril. I will say that moving through it does automatic damage unless they have magical protection. Walken's natural fire resistance might put a -2 on damage to him.

But as it is a magical planar event, let's offer a magical advancement for braving it without magical protection. It stands to reason Lorenz may have first come here for the storm, so let's say it can boost a pact with Salamander.

Just creating an anchor that won't be destroyed by firey rocks falling from the sky is a challenge, but it is clear that at least some people go down there. Let's offer the PCs two routes, through he mill complex, if the Engineer will let them through, or climbing.

Some horror stalks the caverns of the lower fissure. This will be the penultimate encounter. I will roll up a monster when they reach the cave, but In will start by rolling three bits of gossip, and then roll to see which one was false when I get to it. (1-3)  It has a forked tongue that ends in two heads, one is aware (Distinctive feature ⚃⚁); (3-4)  It is a fey creature with nature magic and razor claws (Pacts and Blades ⚀⚀, ⚀⚂, ⚁⚃); (5-6) It can bend time to slow your per perception (Special Skills: ⚃⚀).

The fire bees need  some source of pollen. I love the idea of varieties of glowing elementally magical flowers flowing in the lava tubes. Let's assume there are many strange varieties with different effects, not even understood by the locals. Let's create a table for their effects.

The final encounter, where the PCs have a chance to make a pact with the Mother of the Fire Bees. An Orderly being with a domain over insects and venom. Making the pact may require a trial if she is unimpressed with her guests and their offering. (I will roll some monster qualities for her later.)

I have provided encounters that are necessary to meet my narrative. Now, I need to add in a few I can randomly determine to add some flavour, challenge, and surprise. I also need to offer at least a couple of Blades Advancements.

This rogue Wyvern has several javelins sticking from its hide, and is blind in one eye, but is lethal all the same.

A brave, or maybe mad half-salamander is seeking fire blooms, mushrooms, and minerals to experiment with in the depths. (Roll 1d3 for Difficulty) use the BD&D NPC reaction table. On a Hostile, they are eager to try human meat. If friendly, he might share his techniques for harvesting ingredients offering a Blades advancement (-1 Axes).

The Gourmand has a clever that acts as an axe of incredible quality (-1 RV), a pouch of fine spice, rope, grappling hook, a few coins, a coffee service, coffee beans, and a first aid kit.

A follower of some of Inferno's ancient smithing traditions, he has restored an ancient subterranean forge and is smithing in a lava-heated forge. For those willing to help him in his labours (requires magical protection) can gain a Blades Advancement (-1 Hammer). He might also trade for magical weapons (-2 to RV for a share of the royal jelly.)

High quality weapons, armour, and tools are available all around this forge.

A range of hazards related to going deeper into a volcanic fissure most will offer either automatic damage, or possibly a situation where a fall or injury might result if the PCs don't act fast.

A hulking, carnivorous, barely-sentient beast like the one that killed Doraleous.

Now that I have some possibilities worked out I will start with Dealing with the Storm, then beginning the process of Getting Down. Once the characters enter the Chasm they will navigate downward through ruins, caves, and climbs. My PCs will require 6 points of progress. Each Turn I will roll on a random Descent Table and either gain raw progress or roll an encounter. Backing away from the encounter is -1 Progress. Completing an encounter +1.  If it matters, I will also create a random terrain table for where the characters are.

Once 6 progress is made, we will have our run-in with The Thing, before reaching the The Hive.

Now that I have a setup, I will dive in in the next article in this series.