Building an Adventure (pt. 6): Making it Memorable, and Campaigns


Over the last 6 articles, I have built an adventure in something close to real time. I wanted while I was doing it to explore the decisions you make and the mental processes, as well as the tools I can make the job of adventure planning easier.

I wanted to finish with a few thoughts about making your adventure memorable and making it part of a living campaign.

If you liked this adventure, an updated, cleaned-up and slightly expanded version of it is now available on DrivethruRPG.

Making an adventure memorable is by far the more important to those two ideas. At the end of the day, you have limited time to enjoy this hobby. If you are a Game Master or a creative involved in preparing materials for a tabletop role-playing game, it pays to make sure that time is spent very well. And unremarkable adventure is a lost opportunity.

This isn't to say that every encounter has to be full in technical complications, tactical considerations, or be weird and wonderful. Sometimes a baseline game of kick in the door, fight the monster, steal it's treasure, repeat is very fun and memorable. A lot of it has to do with delivery and play at the table. However, a well designed set of encounters definitely makes it much easier.

Borrow from the Best

The OSR is currently outputting a huge amount of technology and design experiments that make it much easier to plan something that pops. Keeping up with what's going on, and occasionally reading something if it grabs your attention is worthwhile.

Success is often a matter of learning to steal from the best. If I were to create my own osr reading list, I would definitely include the following because they have helped me create a far easier to use design

I will also say something controversial, which is that you do not have to create something that is wholly innovative in order for it to be worthwhile and memorable. In fact, pushing too hard to innovate is often a vice of the indie game community. I would rather see a couple of common ideas used exceedingly well then see new ideas created for the sake of pushing new ideas without any reference to usability.

If you're not familiar with the concept, your Voice is your particular set of unique ideas, details, topics, and themes that you do well. When you are writing the things that make you excited and that you have a lot of thoughts on, it tends to show in your work. 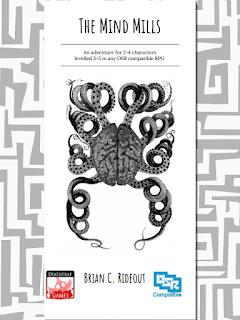 For example, I love strange mushrooms, drug trips, confusion and disorientation, stories about traveling inside the mind or using the minds to explore the universe, devices from alternate timelines, complex courtly intrigue, foolish romantic gestures, and themes of freedom versus tyranny and the liberation of prisoners or slaves. if you look through my modules, you will see at least two of those in every one of them. And they are usually the best encounters. I believe that The Mind Mills is probably my best work despite his relative simplicity, because every encounter is one that is themed to my particular interests.

Most new GM's often have the best ideas for adventures as long as they don't feel like they have to be slaves to a challenge rating system or prefabricated creatures and obstacles. If you allow someone who is not spent years steeped in the culture of Dungeons and Dragons and other tabletop role-playing games to feel free to change his own monsters, obstacles, spells, etc as part of their adventure design, you will find that they usually embrace their voice as a matter of course.

The big problem with modern additions, is that they're so easy to break that creating new content and having success with it requires experience and system knowledge. Older more modular games, like OSR material and extremely rules like games like Cypher System or Tiny Dungeon tend to invite more experimentation because of their simplicity and bounded accuracy.

When you feel like you must work within a system with a lot of moving parts, it can be a lot harder to create your own content and express your own voice. Older GM's who have been playing for years can't get into a rut where they are constantly trying to produce material that has extremely broad or generic appeal, or that will please the audience without reference to the touchstones of their own Voice.

GM's who face burnouts after spending years as forever DMs often try to stimulate their interest in the game by trying totally new things completely alien to what they had done before. This can be refreshing at times, but it can also drive them away from their voice and make them less passionate about the material they are created. Experimentation is good, as long as the experiment is still exciting.

I wrote earlier in this series about how to design an effective NPCs. Ultimately, you have to understand their motivations. A list of three things they want, three things they do not want, and three facts or quirks about the character is a good framework to start with.  The Dungeons & Dragons 5th edition bond, personality, flaw, and ideal is not a bad framework either, but doesn't capture their motivations quite as well.

This is not necessary for single encounter or short-lived villains. However, if you plan on making any character recurring or making them part of a complex social encounter you need to have a pretty solid idea of what they want.

I find it is also the case that if you make your villains truly villainous rather than misguided but basically decent people, or morally ambiguous. your players will find that they remember them a lot more vividly. Well good versus evil is a visceral theme; it connects instantly with many players and, contrary to popular opinion, can still create a lot of room for nuance.

Not every role playing campaign has to have strong continuity. A West Marches style game, an exploration and dungeon crawl themed game, or a campaign that is really a series of one shots with continuous characters across them don't need much in order to be functional campaigns.
For these campaign structures, if you want to carry on to the next adventure, all you really need to do is make sure that the player characters have a good home base near the adventure site where more hooks can be found.
It can help to plant treasure maps or other adventure hooks in your current adventure. The excitement from your current adventure tends to carry over to excitement for whatever adventures are hooked within it.
In my upcoming Index Card RPG adventure Harkin's Slave Pit, the player characters have an opportunity to steal a journal with the locations of several other secret facilities. It is clear that the villains running the dungeon are just mercenaries for apprentices of greater villains. And they can learn that many of their fellow prisoners have been carted off to these other sites once they are broken in this one.
It also has a portal to an otherwise unmapped goblin infested cave complex.
This information was enough to drive an extremely long and exciting campaign about sabotaging the other slave sites, freeing prisoners, gathering evidence against the crooked baron running these illegal slave pits, and breaking the power of his court wizard. The players are currently in the process of raising an army to assault the Baron's Castle. That single journal has been all they have needed to build an entirely player driven campaign.
Making an adventure site an access point to other adventure sites in some way also is very valuable. Whether that's because of the network of teleportation circles, a doorway to something deeper, or a map to a mysterious island or other adventure location, offering a route to the next site let's you push players on to more action very quickly without too much time spent in town shopping and gathering intel.
A recent short campaign I ran hinged around finding an airship buried underneath a temple that had a mind of its own, and would take player characters too unexpected places as the game continued.
This is something I have done at the end of this adventure. I've created a doorway to a lost world full of dinosaurs that the Salisstach and Australopithecus came from. At the Game Masters option, it is also a one-way doorway, at least temporarily. The next adventure will have to be about gathering supplies and finding a way back to Fatheirir side of the mountain... if indeed there even on the same world.
If I get enough engagement and feedback with this l adventure once it hits DrivethruRPG, I may kickstart a much larger multi dungeon module:
This would include a Lost World hex crawl full of roaming dinosaurs, and two warring factions of Salisstach.. Player characters can look deeper into the threat posed by these beings rising and enslaving the surface world with superior technology. Including , at their option, destroying the ark in which their the last of Salisstach civilization is hidden. It would include aeries where rideable pterosaurs might be found, hidden Australopithecus villages, and libraries that are millions of years old with lovecraftian texts in them. Not to mention several bizarre industrial complexes like this first dungeon.
All at all I would like to create a 10 hex crawl with about 30 encounters scattered throughout it, plus five additional dungeon adventure sites. I would make each of these adventure sites interconnected to encourage players to visit the others, making a short campaign built on a very open set of options and complicated moral dilemmas.
Posted by Brian C. Rideout at 11:24 AM