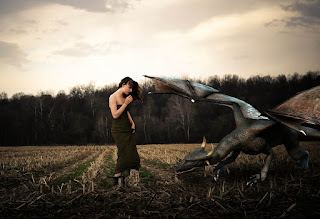 Another lost mechanic that I find very valuable is the NPC Reaction Table. I have discussed this in detail in my article on social combat, but I wanted to cover it again in the context of my current project.

NPC reaction tables are a 2d6 mechanic in Dungeons & Dragons, which appear to be the base DNA for the entire Powered by the Apocalypse Engine. Depending on the roll, on NPC can be outight hostile, unfriendly and wishing to be left alone indifferent, mildly friendly and open to persuasion, or downright helpful. 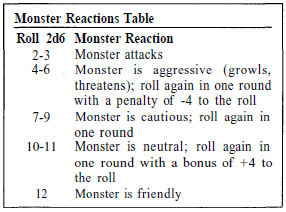 This roll, along with the distance from an NPC and determining who is surprised, were the three things you did at the beginning of every encounter, although any of those things might be pre-scripted for many encounters.

For any reaction other than hostile or friendly, the player characters had a chance to make a good first impression. Their actions in that round could add a bonus to another roll on the next round. If a character with a high Charisma took the lead, their charisma modifier could be added to the roll as well.

If you did not have a pre-scripted reason why a creature might attack, it was actually most likely that it would not act first, but rather be threatening or cautious when the player characters arrived. It was just as likely combat would start because the player characters initiated it as not.

When AD&D2e introduced the a Bard class that could be taken at first level (it took nearly 16 levels of multi-classing to be a Bard and first edition) one of the major powers of the bard, and the first hint of social skill and interaction subsystems in Dungeons & Dragons agons, was to be able to automatically shift an NPC's reaction to the next most friendly level on the table.

In third edition, NPC reactions became a codified set of conditions based on the old table. It was shifted to a d20 mechanic whereby skills like diplomacy and intimidation could move targets one or two steps up and down the scale. For example, if you encountered an unfriendly creature you would have to roll X to make them indifferent or on a roll of Y they could become friendly.

However, NPC attitudes became otherwise solely a matter of GM fiat. There are no randomized means of setting an NPC  attitude. In modules, NPC attitudes are occasionally listed in the character description, but often they leave it up to the GM entirely.

5th edition is a little more abstract: it simplifies a creatures reaction to hostile, in different, and friendly. Charisma checks are used to  deter one whether a creature agrees to a request, with different results tables for each. The creature might be shifted to a different attitude by touch in on the creatures bond, ideal, or flaw. However, 5e does not give good guidance for determining the bond, ideal, or flaw for most NPCs and definitely not foe monsters. Nor does it give much guidance on how to determine that initial attitude outside of DM fiat.

Why This Was a Good System

Part of what made Dungeons & Dragons' earliest incarnations was that while combat was detailed, it was not the focus of the game. If PCs were "kicking in the door" they would end up dead pretty fast. Combat without surprise, carefully stacked advantages, and solid intelligence is a fail state in the TSR-era editions of D&D.

The real focus of the game was a mix of exploration and burglary. It was, in essence a game of tomb-raiding. Monsters were meant to be worked around, not ploughed through. That means that negotiation was not just a valid tactic, but a smart one. Whether it's possible or not needed a means to be determined.

This occasionally led to some interesting surprises. Like in my last solo play, where the terribe monster everyone was afraid of turned out to be chatty, and very upbeat about its desire to terrorize someone into catatonia then use them as an incubator for an alien invasion. So friendly in fact that it was quite surprised when one of my PCs  ripped put its tongue. The next time I played the adventure as a module, the same terror decided that the PCs needed to be torn to shreds within seconds of meeting them.

Likewise, in the final encounter of the solo play the queen of the fire bees decided to demand a human sacrifice from the party, while in the later playtest he was an absolute darling.

The Chaos that the NPC Reaction Tables added to Dungeons & Dragons took a lot of guesswork out of D&D while adding surprises and prompts for improv into the game. Obviously, the mein or motives of a lot of NPCs in a role-playing adventure, especially where it is important to the premise of the adventure, are predetermined. But where the game is ambiguous it is far less taxing - and often more fun - for the GM to let the dice resolved the ambiguity,

There is also a tendency in Dungeons & Dragons to default to combat, even though the early editions of D&D were punishing, simply because it is fun, even when it is lethal.

Why Did NPC Reaction Tables Disappear?

Obviously,  I was not around in the WotC offices when Dungeons & Dragons 3e was created, but I gave a pretty solid idea about why the NPC Reaction Table was removed from D&D: it no longer suited the tone of the game.

Third Edition was the start of a gradual shift in D&D towards being a game about monster-slaying and heroic deeds, rather than tomb-raiding adventures. Combat became the default way to resolve encounters.  Consider the way official articles on adventure design like "Adventure Builders: Planning Your First Adventure"  by Wolfgang Baur recommend four "pure" combat encounters,  a swarm of "mooks" to bulldoze through, and a "bigger fish" that the PCs can't defeat except with guile, and a climactic battle.

Monsters are for slaying instead of evading and negotiating with, then a table to determine how they start out towards Pcs is far less important. In general in 3rd edition or later, combat is assumed and it is remarked upon when a creature is not interested in combat.

At the same time, the emphasis on (heroic) "Story" as part of the play experience meant that the DM was expected to use a lot more fiat in NPC behaviour to create that Story. This is ironically giving more control for the DM in the name of constraining them to a particular mode of play: story-driven and combat heavy.

Which is the same reason why PCs in 3rd edition generally were closer in ability at 1st level as characters to 3rd level AD&D characters, and to 4th level in the current edition. With Combat being the preferred default, the game requires PCs to be far less fragile.

In OSR Games, NPC Reaction is currently, as far as I can tell, a matter of taste: purists tend to use it, many others see total GM Control preferable. Several alternative systems have emerged to expand or improve NPC  Reaction.  Two in particular stand out.

In Troika! (A retroclone of Advanced Fighting Fantasy) creatures come with a random "Mein" table that describes what the creatures current mood or attitude.

In The Dark of Hot Springs Island encounters are generated by determining the Type of encounter, then a creature of that type, the number appearing of the creature rolled, and the current motivation or activity of the creature, each using a 3d6 roll in a specialized table. The curve on 3d6 trolls makes it easy to make some encounters and behaviours more common than others and keeps the behaviour matching the creature type.

While the motivation doesn't directly describe how a monster feels about the PCs, it allows the DM to judge how a creature might act based on how it might respond to getting interrupted,,possibly informed by the PCs reputation with the creatures faction.

Final Thought
I have heard it said that NPC reaction tables are not compatible with a good role-playing. I think it is the opposite. A random character response gives the GM a prompt for role-playing that a creature simply hanging out in its Lair wouldn't have. It invites improvisation, and offers additional surprises. It also makes it less likely that every encounter will automatically become a combat situation.

Adding a little bit of controlled Randomness, especially if it is designed to still make sense, like The Dark of Hot Springs Island, can make the game far more exciting and rewarding for the DM, even if it takes away some of the control over the narrative.