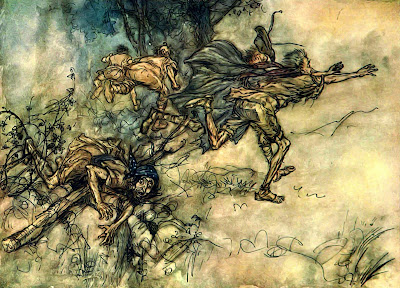 One of the things I would like to do this month as I discuss my latest adventure design is to cover rules subsystems that are common in early role-playing games like Dungeons & Dragons, but have fallen by the wayside. The first of these is morale.

Morale was a subsystem to help you measure the flagging courage and will to fight of belligerents in combat or social conflict in Dungeons & Dragons. It used to have analogs in several other systems as well, but was one of the first subsystems to start disappearing as TTRPGs underwent a paradigm shift in the early 90s..

As it appeared in earlier editions of Dungeons & Dragons, morale was a system with two parts. One was a measure of the baseline courage of the encountered creatures, and the other was a matter of knowing when to roll morale checks.

The measure of the creatures morale varied with each edition of the game. It started in chainmail as a 2d6 system. In the Basic line of Dungeons & Dragons products it used a D12. In AD&D it was a percentile system. And in A&D2e it was a d20. By default, most creatures had a slightly above median rating. So, creatures and basic had a six, creatures in Advanced had a 55.

The real trick about morale was when to roll it. there was a list of circumstances which varied a small amount from addition to addition they covered when morale should be rolled. And it varied whether the player characters were facing a group or single monster. For a single monster first blood and dropping down to half hit points were common markers. For groups losing their leader, losing their first member, and then losing half their number all triggered morale checks.

Beyond those, The players receiving reinforcements the use of impressive magic, an incredible display of skill by a fighter or actively trying to intimidate enemies through role-playing could also all trigger morale checks.

Monsters are not the only ones that use morale. NPCs such as hirelings and henchmen also had a morale rating that was modified by the charisma of the PC to whom they were supposed to be loyal. During certain situations, such as the first time someone gets injured, when a trap goes off, or when the group faces a monster, an NPC might roll morale to see if they stay with the party, or if they abandon the party and flee back to safety.

In most of the editions, morale checks had a number of possible numerical modifiers. Creatures might have a higher morale if they outnumbered the player characters, were much larger than them, or were protecting their homes, for example. They might be more likely to fail morale with negative modifiers if they were outnumbered, surrounded, or otherwise weakened.

Why this was a good system

Combat in Dungeons & Dragons, especially in older editions, could be quite lethal. Before the third edition era, most creatures couldn't take more than a few hits before dying, and combat was treated as a dangerous tactical puzzle, whereas in the modern era it is treated more as a sport.

Because of the difference in goals, when player characters encountered monsters in early editions, sneaking around them, fleeing from them, or outwitting them was often a better choice than battle. Combat could effectively be seen as a fail state

Under those circumstances it paid to constantly remind the player characters that they may wish to flee. Using the monsters to set an example was a good policy. Likewise, it meant that smart players get attempt to gain an upper hand and force creatures to flee or surrender rather than fighting to the bitter end.

In part, this is also a matter of what we see Dungeons & Dragons as. Early players thought of Dungeons & Dragons as a virtual reality to explore and become immersed in. While it wasn't trying too hard to be realistic or a perfect simulation, some things had to make logical sense. Creatures that fight to the bitter end does not make sense, and can be jarring to your immersion, if you stop into and think about it.

Moreover, morale adds a element of chaos the game that lightens the load on the GM. It is the surprise to the dungeon master when the courage of the monsters flags and they choose to surrender or flee rather than die. There's no need to consistently try to roleplay that out or ask yourself when you would consider cutting and running.

Systems like morale also create a useful wall of separation between the GM and the npcs. The GM does not have to work as hard to roleplay and portray the NPCs, because a lot of the guess-work about what's going on in their heads is handled by dice. it kills the temptation for the GM to appropriate characters or invest themselves in monsters in a way that creates an adversarial atmosphere in the game.

Why did Morale Disappear?

Morale is a subsystem is time-consuming. As written in older editions of D&D, it requires checking tables and modifying morale scores, and remembering when it is appropriate to roll.

Streamlining play in the mid-90s (when the idea of playing role-playing games for the story really emerged) involved removing as many subsystems as was feasible, and wherever possible unifying mechanics. Because morale was consistently using different mechanics, different tables, and was used in situations in a way that didn't quite fit the model of either an ability check or saving throw, it was easy to give it the ax.

And because they trend at the time was to take task resolution out of the GM's hands but try and put more Story into them, it also seemed perfectly reasonable to say that the GM should merely decide when and if enemies would flee.

Removing morale led to the unforeseen consequence of turning combat in role-playing games is something done frequently to the death, simply because that was hard to determine, using only your judgment and adjudication, when an enemy would lose their nerve. That in turn led to an arms race between the PCs and the monsters in the game, where optimization for combat became essential. With the challenge rating system also in place, any GM using it guaranteed that their players could overcome anything put in front of them if they use the right mix of tactics. Combat ceased to be a fail state in the game, and became instead a sport that was at the core of the gameplay mechanics.

it also ironically he raised the cognitive load rather than lowering it for the GM by streamlining the mechanics. Now, the dungeon master didn't have a simple die roll to make every few rounds; instead, they had to constantly check in with the narrative and the construct of the creatures in their heads to decide when flight happens. That can be a lot of demanding work. It also increases the odds that combats drag out to the bitter end, making them longer and thus increasing the amount of time spent having to do the mental work of tracking combat.

Like I said in my earlier article, when you have a little Chaos and randomness in the game, the GM gets to have an adventure too. It is as surprising to the GM as the rest of the party when the monster retreats, meaning that they didn't already know what was going to happen. After all, the dungeon master is a player too, he just has different tools. He has just as much right to enjoy himself as anyone else. Including that joy of Discovery.

The OSR contains a number of interesting innovations in the field of morale. These are worth considering if you are going to include it in your own game.

In Lamentations of The Flame Princess, firearms can only be fired once per combat, as they are still primarily flint and matchlock weapons. However, the thunderous noise, the smoke, and the powerful attack are frightening. Accordingly, enemies have to roll a morale check every time a firearm is introduced into combat.

Dungeon Crawl Classics RPG has a pared-down morale system where all creatures are assumed to have a morale of 10, and any roll of 11 or higher means they have lost their nerve. Some modifiers are suggested. One of the interesting things they've added, however, is that at the end of an adventure any new henchmen or hireling who just gone through their first adventure should roll morale. If they fail, they retire from the adventuring profession all together, and will not join the player characters on any further adventures.

I believe that morale would be more easy to use if we got rid of the heavy modifier tables. Instead, it would be very easy to use advantage or disadvantage on morale. Once the leader is dead, half a group's number is gone, a creature has received a critical hit or a particularly intimidating mighty deed of arms was done, the next morale check should be made at disadvantage.

Modern role playing games pay less attention to the enjoyment of the Game Master than they lots to do. They give a GM incredible power over the game world, but without some Chaos, that level of power, control, and responsibility can often be more taxing than rewarding. And, in the process of attempting to give GMs my story power, we introduced into the game a number of unusual weaknesses, like a higher chance of fights to the death, and drawn-out battles. Morale may have required a little more dice rolling, but saved a ton of mental work.