Deathtrap Games: A Year in Review

It has been one year since I started Welcome to the Deathtrap. A year making new friends, trying new creative projects and joining in a hell of a lot games. I want to take a moment to reflect on W2tDT's first year.

Before I start with the content of the blog, let's talk about what inspired it: the games.
2020 saw the end of one business and health issues made me have to indefinitely suspend the other. (People who insist on voice acting with chronically sore throats, don't voice act for very long.) This left me with more time on my hands for my hobbies as I cared for my sons.

But two small kids, and a wife whose job got crazier due to the lockdowns meant that while I has more time she had less. So I started to look for faster, simpler games than Dungeons & Dragons 5e to play, and took a derp dive into OSR and indie material.

I fell in love with two games in particular Index Card RPG Core 2e, and Low Fantasy Gaming. I ran three lengthy ICRPG campaigns this past year: one with nearly 250 hours of total play, another that mixed in elements of Blades in the Dark with about 75 hours, and a third that ran about 80 hours. Plus a couple that failed.

Meanwhile I joined in Stephen Smith's World of Weirth playtest group running Low Fantasy Gaming and have played for 25 sessions, most of them as my lovable scumbag character Lieres who is the character I have played the longest in my entire TTRPG career as a PC. I have enjoyed it so much that I have run one short (24 hours) campaign with my home group, and have one ongoing game at 66 hours and counting.

That is on top of making my own system, several short "fizzles", running an ongoing game of Basic Dungeons & Dragons for my son, solo games in Pacts & Blades and Four Against Darkness, playing in a few one-shots, and signing up for but being unable to play in a West Marches OSE game.

I have played more and got a lot more game in with each session than I thought possible. And that has made me very happy. I have had a lot to write about!

I started with the hope that I would get the chance to review a bunch of the incredible OSR products that I had picked up when I had a few extra dollars.

I decided that I would know that I had arrived when people started seeking me out for reviews. I was very lucky to have quite a few amazing review requests, including:

My reviews have let me also help new creators get a little extra exposure, like YumDM with his D8 Monthly.

I have had a great response to my own adventures as well. I have released a handful of short OSR-compatible adventures using a simple pamphlet format:

And I have two full-sized modules:

The Face of the Temptress is for OSR games and takes a radical approach to possession, and includes hooks and encounters leading to a Showdown with a powerful ghost, but there is some debate as to whether it is really an "adventure" or an artifact, rule set, and encounters in a cohesive not-an-adventure bundle.

All of these are Pay What You Want titles except Harkin's Slave Pit, which is $2.

And I have built my own heavily customized B/X clone called AEr that is not yet out for download, but two classes for it with new takes on TTRPG tropes are available.

After creating two grotesque images based on monsters from the Thursday night Low Fantasy Gaming campaign I play in, I managed to earn my first book cover commission. I hope to share more art later, but here is the nightmare fuel that landed me the job: 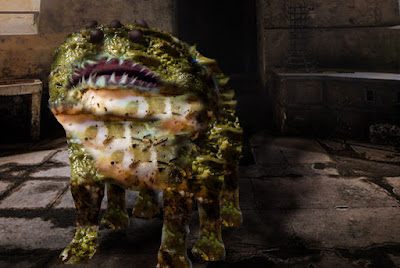 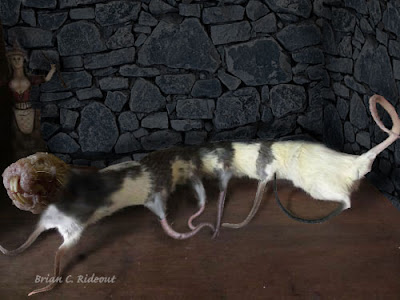 The Grave Rat
I also have been privileged to earn some money consulting on adventure design and development.
All of which went straight into more material to review here.

I have been fortunate enough to have a lot of rewarding conversations this year on Twitter and Facebook about all kinds of TTRPG related topics, including some fantastic exchanges with Travis at Grumpy Wizard and Ian at Dweller of the Forbidden City.  I have bandied words with the formidable Hankerin Ferinale about his glorious ICRPG. I have had lots of exchanges with Aaron the Pedantic, an OSR superfan who is fairly new to TTRPGs in general. I have had some fantastic words of encouragement from The RPGPundit and have done a lot of goofing with the hilarious Venger Satanis. I have had the joy of many late night conversations with Stephen Smith (responsible for the nightmares above) and science fiction novelist Thomas Fuller thanks to this blog, too.  All of whom have brought me a lot of joy.

A special thanks goes to Jobe Bittman who has been an incredible encouragement. And Ezra West, for all the deep conversations.

I have also had the rare opportunity to fill in for Venger on Inappropriate Characters.

I have also been floored at how many people have enjoyed and shared the 150 posts I have produced in the past year. What has really been humbling, though, is just how many of you have wanted to read, share, and discuss my articles on gaming culture and philosophy. My most popular articles have been consistently the ones where I dig deep into meta cognitive discussions of game rules and play styles.  The top viewed non-review articles on W2tDT are:
Of course, over time a few reviews have gathered a pretty impressive view count, too. I am proud to say the view count on these reviews can be counted in the hundreds, or in a few cases, the thousands:
If there was one thing that I wish had gotten more attention it would have been my article on how Chaos and Surprise Makes the Game more Fun for the GM.

I am currently working on two projects beyond content for this blog and adventures.

The first is my Rules Cyclopedia, a collection of useful an easily Ported Rules. It has not been updated lately, but I promise you that it is still being worked on at the back end.

The other is a podcast. I would love to see what would happen if I got some crusty OSR guys together for laughs with some of the most deliberately over the top dark and weird material, like Lamentations of the Flame Princess' Towers Two, or play the ultra New-School Candlekeep Mysteries with them to get a laugh, a shrug, or maybe a genuine revelation out of them, done as a live stream.

If I were to get incredibly brave, I might even follow those up with a round of Alpha Blue played as explicitly as the comfort level of the players could get... I'm a genuine Gen. X slacker. I try to hang no matter how much I might squirm. Might be funny to test out my limits with the sleaziest good time you can get in a TTRPG.

That all, however, has one hell of a learning curve to it, and would require some capital to boot.

When I started this blog, I wrote 148 one sentence prompts to give me ideas to write about... I have only used 26 of them. I have enough ideas to keep me going for at least another year. And I have learned of many other products that I want to review. And ideas keep coming up.

I also have a ton of adventures in various states of completion that should be finished in the next few months, many of them traditional module length, or even campaign-length. I hope to put out a few more pamphlet and zine-sized works as well.

I want to thank my readers after just a year this blog has more eyes on it than the professional one I wrote for a decade. The OSR and indie TTRPG community has been welcoming and positive. I appreciate my readers and hope I can keep bringing you the content you enjoy for years to come. 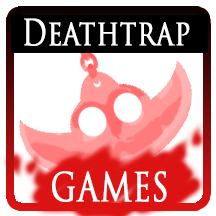